(I’m going to do this post in parts, because, as it turns out, I simply can’t write a blog entry lately that doesn’t go on forever, and I’m trying not to exasperate anyone)

If you follow my posts on Facebook you may have noticed that I’ve been posting quite a few articles lately that deal with things like disability rights, ableism, euthanasia, autism, etc.  You may be confused by the amount of posts along these lines, or, if you’ve only recently been following me there, you may wonder if I’m some kind of activist.

I was thinking about this the other day and decided I needed to write a blog post on it.   I wanted to write this yesterday but got sidetracked by the previous post, which got too long to add to.  This one’s going to be long as well, but hopefully a few of you will take the time to read it.

Over the past few years I’ve gotten more involved with the disabled community (and the autistic community, which overlaps, of course) than I have been since I was playing wheelchair basketball in college. 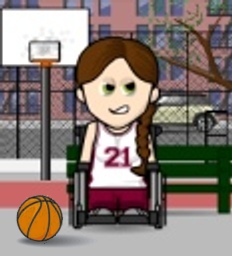 Back then, my sole focus was on the disabled sports world, which sucks you in to this sort of alternate reality, a very small world full of very talented people.  Everyone knows everyone else, and anyone in the disabled sports world who is any good has probably been to or is thinking about going to the paralympics, sometimes for more than one sport.   Basketball was the only sport I was really interested in, and it turned out I was great on defense.  But I hadn’t been involved very long when I got a $10k scholarship offer to IU (who, at least at the time, had the best wheelchair sports program in the country, and treated it like a regular varsity sport), and people started talking about the next paralympics.

I was a bit overwhelmed, but for the first time my athletic nature was able to shine beyond my disability.  I was healthier than I had ever been.  I was in my element.  I was surrounded by people who were all disabled, but who were all in their element.  Many of them with sponsorships from wheelchair companies and the like.

Being surrounded by other disabled people for the first time in my life left me a bit dumbstruck.  I had worked with disabled kids in the past, and knew a decent number of autistic and otherwise disabled people, so it wasn’t that I had no exposure to the disabled world.  But these were people of various disabilities, with varying degrees of problems, all immersing themselves in physical activity instead of running from it.  I started working in OSU’s sports center with the adapted aquatics and other community programs and I was exposed to an even larger and various group.  I spent large amounts of time with people of all ages, with spinal cord injuries, amputations, polio, quad cp, sma, MS, and many other disabilities.

Their attitudes ran the gamut.  We had the classic “angry cripples”; we had those determined that they had no disability at all, despite the hardware they depended on; we had lonely teenage boys whose mom’s brought them in, hoping beyond hope that this could finally help them gain some self-confidence despite their extreme limitations; we had guys who were in it to show off and find hook-ups; we had the occasional hypochondriac; we had former paralympic champions who were well past their prime, hanging out just to stay involved; we had rising stars; we had people who just wanted to see what this crazy idea of disabled people actually participating in sports was about; we had a few in physical therapy; we had PT students trying to gain credits; we had an entire little community, with all of it’s diversity, all thrown together in one little world full of sweat and hard work.

I was exempted from gym class from grades 4-8.  When I got to high school physical activity credits were required to graduate, and I lived in a small town who only had one real option, gym.  The kids in sports I think were allowed to count that as their credit, and some of the teams had access to a weight room, but most of us were stuck with an old style gym class, that did a small amount of weight training in the spring.

Let me convey to you how insane my high school was… I was not even allowed to bring my wheelchair in to gym class.   You read that right.  I could walk, but I used my wheelchair some days, when I was doing badly.  Our school had a ton of stairs, and the poor custodians were actually tasked with hauling my fat butt around from class to class on one of these things: 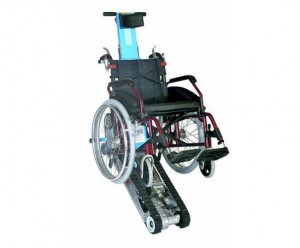 It's far more ridiculous than it looks.

If I hadn’t had a death wish already I probably would have been frightened of the thing.  Every single trip down a flight of stairs felt like a brush with death.  At various times the thing tipped, or my wheelchair came unfastened on one side, or both, and I was left hanging by the seatbelt, sometimes dangling over a side railing.  If we were running a bit late, or it was a long trek between classes, the bell would ring and a rush of kids would come streaming past, often hooking book bags on the parts that hung out, or tripping into or over me or the custodian, or getting run over.  I often wonder how many injuries this thing actually caused, though I think we somehow managed to avoid any serious ones.

In any case, I had to have my chair at school, because it was required for the stairclimber.  Despite that fact, and despite the fact that the custodian wheeled me to gym class with my chair attached, every single day, I was not allowed to use my chair for gym class, so that I could, you know, participate in gym.  So what did I do, you ask?!  I hid in what I think was a concession stand, but all closed up amounted to a small closet, and I did 100 sit-ups.

That’s right.  My high school gym teacher and the principal got together with me, and the best alternative they were able to find for me to complete my physical activity requirement, was to hide me in a closet and have me do a lot of situps.  Because God forbid anyone actually have to see a disabled kid participating in a majority of the activities others did, by using her wheelchair.  They also made me write a report or two that semester.  The next semester I was actually able to convince them to let me lift a few weights, huzzah!  But I still had to do my situps and write a report, since I couldn’t run or do the other activities, because, you know, I wasn’t allowed to use my chair.

But I had had to pick my battles.  I had already fought with the school to *get* the use of ridiculous stair climber so that I could go to class with everyone else.  I’m not sure what they would have done with me otherwise, but it would not have been pretty.  I had also had to fight with the administration on a number of other issues related to academics and other things that would actually affect me later in life, so I just didn’t have the energy to fight much on the gym thing.

In any case, when I got to college at OSU I was literally chased across campus by a chick in a wheelchair (who happened to run the adapted recreation department) who proceeded to beg me to come try out a sports chair she had stuck in a closet somewhere.  I was baffled, but intrigued by the idea of a sports chair (and whoa, look how easy she’s moving around in that beauty she’s in!) and 2 minutes in that old quickie tennis chair sold me on the prospect of wheelchair sports (and lightweight sports chairs!).

I got involved in the disabled community shortly after that, but we were intensely focused on sports.  I heard rumblings here or there about advocacy type things, but the diversity of the people involved in our programs was such that no one ever really rallied around anything other than sports, unless it involved figuring out the logistics of getting an entire group of wheelchair-bound people to a game, or putting them up for the night.

Just a couple of years after getting involved in that world, though, my hands started to atrophy and I had to stop playing basketball, then I ended up having to move out of state and got away from the community entirely.

Fast forward to today, where I’ve gotten involved in the disabled world once again (mostly online).  And unlike the sports world, where I actually had a little talent.  I feel completely inadequate here.

And this is where I’ll break for Part 2, where I’ll go into what it’s like to live with a disabilities that confuse most everyone I know…

2 Responses to Advocacy and Inadequacy – Part 1